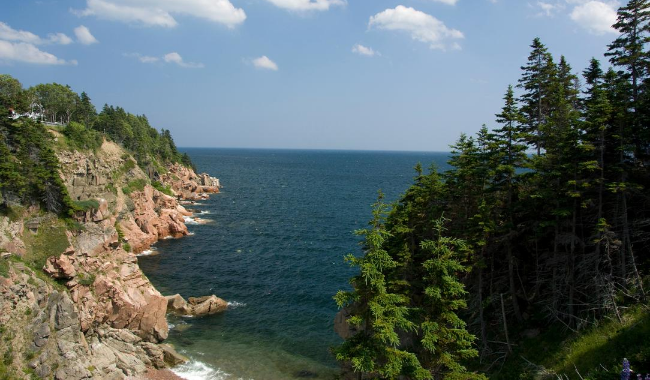 Rugged and pristine beauty. Fun-loving Acadian and Gaelic culture. Fun and adventure awaits. Uncover the treasures of the Canadian Maritimes, from the Cabot Trail to the amazing Fundy tides, Nova Scotia’s Peggy’s Cove and beautiful Prince Edward Island. Delve into a friendly culinary contest and undertake a competition to cook the best mussels. See the four-story high flowerpot-shaped Hopewell Rocks. Savour a traditional Maritimes lobster feast and learn how to eat lobster like a local. Visit the Anne of Green Gables Museum and learn about potato farming. Immerse yourself in the region’s Gaelic heritage and travel along the striking Lighthouse Route. Be inspired by the many inventions of Alexander Graham Bell at his own museum. At the Fisheries Museum of the Atlantic, board a boat and learn to shuck scallops. Don’t miss the rugged beaches, picturesque fishing villages, and rich seafaring history of the amazing Canadian Maritimes. 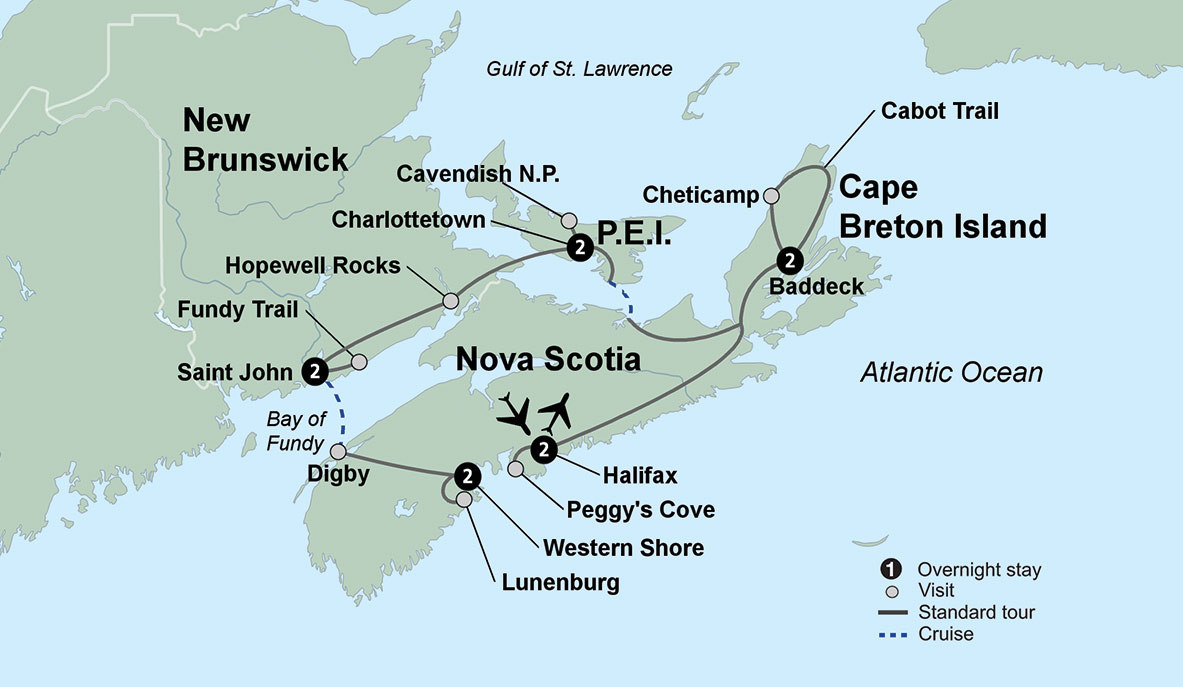 The Westin Nova Scotian is ideally located near the harbor and perfect for exploring the city of Halifax. It is walking distance to popular attractions, including museums that celebrate the rich history of the city. Enjoy local music in nearby pubs. If you’re feeling adventurous, try sea kayaking or going on a whale watch. Return to your relaxing, comfortable home base at the hotel and enjoy the great amenities.

Explore the special region known as Canada’s Maritimes with all its rugged and pristine beauty, all while getting to know its fun-loving Acadian and Gaelic culture.

Day 2: Halifax - Peggy’s Cove - Halifax Stunning landscapes await! We’re off to see one of the most picturesque spots in all of Canada – beautiful Peggy’s Cove. Venture to the coast of the Atlantic to the cove’s historic lighthouse and take in the incredible views. Later, explore Halifax’s charming downtown on a tour highlighting the waterfront, Public Gardens, Spring Garden Road, and the famous Citadel. Day 3: Halifax - Cape Breton Island - Baddeck Head to scenic Cape Breton. Stop to discover the Millbrook Cultural & Heritage Centre to learn about the Mi’kmaq heritage and Glooscap legends—see artifacts including intricate quill and beadwork, and learn some words from the Mi’kmaq language. Travel the Canso Causeway on the way to stunning Cape Breton Island. Set out on a drive by the pristine shores of Bras d'Or Lakes, Canada’s only inland sea. Next, stop at the Gaelic College. Watch North America’s first Gaelic language short film: Faire Chaluim MhicLeoid - the Wake of Calum MacLeod. Afterward, learn how the Great Kilt was made during a brief kilt-making demonstration. Learn a few handy Gaelic phrases and join in the fun of a “milling frolic.” Practice a Gaelic song while sitting around a table, beating a large loop of woollen cloth in rhythm. The “milling frolic” hearkens back to a time when the entire community would get together to help get the woollen cloth ready for use. This evening, enjoy dinner featuring local flavours and musical entertainment of this region. Day 4: Cabot Trail Set off to explore the Cabot Trail. Fall in love with its rugged terrain and spectacular views of the Atlantic Ocean. Visit the famed St. Peter’s Church in Cheticamp. Enjoy a picnic lunch in Cape Breton Highlands National Park. Even more natural beauty and quaint charm awaits as we pause at fishing communities along the coast, including the lovely Neil’s Harbour. Day 5: Baddeck - Prince Edward Island Explore the amazing range of inventions on display at the Alexander Graham Bell Museum. Afterward, take a short ferry ride to Prince Edward Island, the “Land Cradled on the Waves.” Tonight, roll up your sleeves and get ready for the ultimate island culinary experience! Attend culinary “boot camp” where you’ll compete for bragging rights to determine who cooks the best PEI mussels! 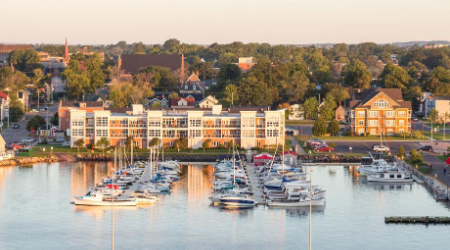 Day 6: Prince Edward Island Get to know the rolling landscapes of Prince Edward Island, the backdrop of the acclaimed novel, Anne of Green Gables. Arrive in delightful Cavendish and view Prince Edward Island National Park’s incredible and pristine beaches. Visit the Anne of Green Gables Museum where you will learn the craft of potato farming from an actual farmer, with a first-hand lesson on the island’s leading agricultural industry. Then, return to Charlottetown with time to explore this fascinating city on your own. Day 7: Prince Edward Island - Saint John, New Brunswick Leave Prince Edward Island behind as you cross the stately Confederation Bridge. Travel along the shoreline to the amazing Hopewell Rocks.* A New Brunswick icon, these flowerpot-shaped rocks carved by the Fundy tides rise four stories high at low tide only to disappear into tiny islands after the tide rolls back in. Continue your journey through New Brunswick to the city of Saint John where you’ll enjoy a 2-night stay in the bustling waterfront area. Day 8: Saint John Greet the awe-inspiring Fundy Trail early this morning. Far from the bustling crowds, marvel at the views of the Fundy’s legendary tides. Stops along the way reveal an endless stretch of breathtaking vistas, as well as the chance to savour authentic Maritimes dulse (seaweed) and fiddleheads, all while being serenaded by traditional fiddle music coming from the beaches. Stop for lunch at a world-famous restaurant located by the beach on the Bay of Fundy. Savour a traditional Maritimes lobster feast as an expert teaches you how to crack and eat lobster like a local. En route to Saint John, gaze out your window at St. Martin’s magnificent covered bridges. The evening is at leisure in the city of Saint John. Day 9: Saint John - Western Shore, Nova Scotia Onboard a ferry bound for Digby, Nova Scotia, make a stop at the Grand-Pré National Historic Site and uncover the complex history of the Acadian people, proud descendants of the indigenous populace of the region. This UNESCO World Heritage Site, once an epicentre of Acadian culture, is now a powerful memorial to their history. Move on to Nova Scotia’s Western Shore, where beautiful waterfront accommodations await you. Stroll the immaculate beach, where views of Oak Island conjure up legends of pirate’s treasure still waiting to be found. 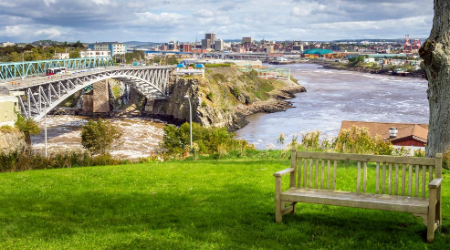 Day 10: Western Shore - Lunenburg - Western Shore Experience the small fishing village of Mahone Bay, then stop at Amos Pewter to learn about the artistry that goes into each of their masterful pewter creations. Then, travel along the beautiful Lighthouse Route towards Lunenburg. Explore this fishing village on a locally guided walking tour and discover how early settlers relied on the sea for their day-to-day survival. Then it’s on to the Fisheries Museum of the Atlantic. Learn how these skilled fishermen prepare and launch a schooner before boarding a fishing boat of your own. Aboard, a fisherman will teach you all about scallops and how to shuck them! Complete your day along the waterfront at a farewell dinner with your fellow travellers and toast the end of a marvelous trip. Day 11: Western Shore - Tour Ends Today you depart the Maritimes, taking home countless memories of this coastal wonderland. 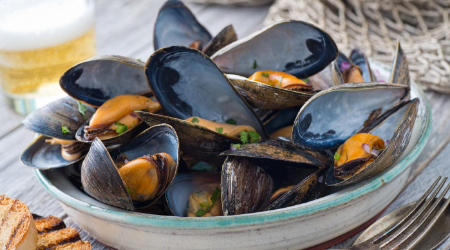 Photo: A bowl of delicious steamed mussels with grilled bread and beer on a rustic tabletop with fish net.

Get caught up in the wonder of the Maritimes and book today! Offer expires August 31, 2020

Use offer code 0LTW2 for savings. Call or visit collette.com/offers for more details. Offer valid on new bookings only and can expire earlier due to space or inventory availability. Savings amount will vary by tour and departure date, and is only available on select departures. Space is on a first come, first served basis. Offers are not valid on group, existing bookings or combinable with any other offer. Other restrictions may apply. Promotional pricing may remain in effect after the expiration date.

This is what Collette is all about; they are the company that does more and cares more about the guest and travel professional experience.

Enquire for the offer now!

FacebookTwitterEmail
* This offer is subject to availability and can be withdrawn or varied without notice.